was born in 1957 at 45 Spellow Lane in Walton, Liverpool, England. To my knowledge this makes me the Everton player born closest to the Everton FC ground, Goodison Park. I was the youngest of seven children (Keith, Derek, Lena, Ian, Ken, John) of two wonderful parents, James and Ethel. Life was pretty tough for Mum and Dad in those days – Dad having to work away a lot to make ends meet whilst Mum looked after seven kids, one of whom, Ken had contracted polio in 1954, aged four. Happily, Ken has gone on to become a world renowned expert on creativity and education for which he received a knighthood in 2003. His own web site can be found here.

“Dad was only given 24 hours to live – but survived another eighteen years!”

In 1959, when I was 2 years old, my Dad had a serious accident at work sustaining a broken neck which left him paralysed from the neck down. On the day of his accident Dad was only given 24 hours to live – but survived another eighteen years dying aged 62 in 1977. However, from the day of his accident Dad was bed and wheelchair bound and required 24/7 care. The fact that he lived so long was a testimony to the unbelievable strength of character, will to live and just pure greatness shown to all of us by him and by my wonderful Mum who carried the main burden of his care needs. My Mum died aged 86 in 2005.

In 1962, when I was 5 years of age, we moved to Widnes in Cheshire (formerly the county of Lancashire). Despite dad’s miserly industrial accident compensation there was enough money to  enable us to move from the small terraced house in Walton to a bungalow with nearly 2 acres of land.  Growing up here was heaven for the family Robinson – particularly for my brother John and I as we now had our own small football pitch to play football on and to argue against for hours on end!

In November 1971 we moved back to Liverpool (to live in the Childwall area of the city) and I attended Holt High School. However, with childhood dreams of being a professional footballer one day and not feeling motivated by subjects such as algebra, I left school altogether in December 1972 at age 15, without any qualifications or prospects of a job. 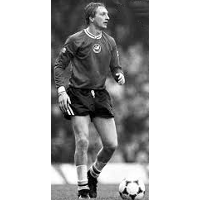 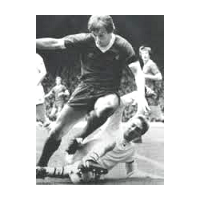 John and I dreamed of playing for Everton but our Dad suggested we write to all of the local clubs. Liverpool were the first to respond offering us both a one-day trial. After the trial Liverpool did not ask John back but I was asked to train weekly at Liverpool’s Melwood training ground and then I was given an extended run in the ‘A’ Team which played on a Saturday. However, we were disappointed that Everton had not been in touch. Our cousin, Ken Parkinson, heard about this and decided to contact a friend of his, Bill McNaughton, who worked in the catering department at Everton.  Bill spoke to the coaching staff who soon rang us up to offer us both a trial. Apparently, our letter had been filed away!  At the time Everton ran a ‘C’ team in the local Sunday league, managed by the legendary Everton centre-half T.E. Jones. John and I were offered an extended run in the team. We also trained during the week at Everton’s Bellefield training ground.

“I dreamed of playing for Everton.”

Being older and out of work John was offered training with the first and reserve teams before being released about six months later. As for me, after a few months of training and playing with both clubs, I was faced with the dilemma of choosing one of the clubs to sign for.  Liverpool were very keen on me and offered me a contract first but as Everton were my boyhood team (and still is!), I gambled on trying to secure a contract with them so turned Liverpool down.

As I was now unemployed too, my brother Ian asked if I could train with the youth players every day and I was fortunately allowed to do so by the coaching staff. After impressing the staff at Everton, I signed apprentice professional forms in April 1973, on my 16th birthday. The following year, my childhood dream was realised and I signed as a full-time professional footballer for Everton Football Club, again on my birthday. 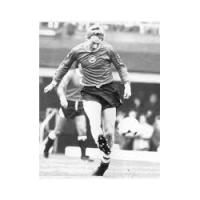 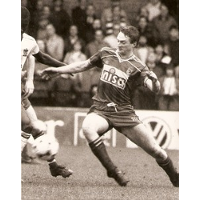 In 1970, at age 13, I became vegetarian after watching a TV documentary about an Amazonian tribe who sacrificed a cow by slitting its throat. After the poor beast had fallen to the floor the tribesmen jumped up and down on its throat to drain all the blood from its body then proceeded to chop up the animal to cook on the open fire. I was shocked by this sudden and stark realisation that meat was actually the flesh of a once living animal. I thought to myself that this just was not right for humans to do this to another species and I decided that I no longer wanted eat any meat. Ten years later, in 1980, I decided to become vegan.

“I was shocked … that meat was actually the flesh of a once living animal.”

This meant that I was vegetarian for the first seven years of my professional playing career and vegan for the last ten years. My fitness was never ever in question at any football club I played for. In fact, I would say that I was always one of the top 3 fittest players at all my clubs.

Back to top
Copyright of Neil Robinson 2020